The chairs in this group are distinguished by their upholstered sling form, with deep, thickly padded, double-needle top stitch cushions affixed to the textile, which is suspended on a cast aluminum frame. There is a side chair, executive chair (high back), and lounge and ottomans in this group. All available with or without arms. These evolved from the Eames Aluminum Group to provide seating with a similar trim profile, but with more in the way of luxurious, thick padded comfort.

One of the Eames Soft Pad Group stories involves Sam Passalaqua, who worked with Charles and Ray Eames from 1967 to 1989. Other Eames staff members report that one day Sam came to a staff meeting with pillows to provide for more padding on the Eames aluminum group chair on which he was sitting. And Charles was reported to have said, “Sam, you may be on to something.”

There is an obvious connection between the Eames Aluminum Group and the Eames Soft Pad Group. Both have cast aluminum frames, on which a form of the sling is suspended. But the Eames Soft Pad Group has, as its name suggests, thick pillows which are sewn onto the sling. But, these aren’t simple pillows. During the development process, Charles and Ray advanced the sewing techniques to a new level and specified that double-needle topstitching would be used to make the borders of the seat pillows. This technique takes twice as long and is twice as hard to complete, but it makes for super durable upholstery.

Both of our partners, Herman Miller and Vitra have produced the Soft Pad chairs in the same superior quality for decades. In addition, they each offer multi-year product warranties for the Eames Aluminum Group and Eames Soft Pad Group that exceed those of almost any other furniture company.

An adjunct to the Eames Soft Pad Group is the Eames Chaise. The idea for it began when Charles Eames accompanied the Eames’s best friend, Oscar-winning director Billy Wilder, on a scouting trip to Newfoundland for his movie, The Spirit of St. Louis. Ultimately, the Eames Office helped to construct Charles Lindberg’s airplane model for the movie, and Charles himself shot the second-unit scenes of Lindbergh’s history-making flight.

In a Newfoundland lighthouse, Charles and Billy noticed a plank of plywood on which the lighthouse keeper took short naps. Billy told Charles that he would like such a perch because he too liked to take daytime naps. The key to a successful daytime nap was to keep it short. With a narrow plank or an upholstered version of similar width, the sleeper could lie down with arms crossed. The nap would end when the sleeper, falling into too deep a sleep, would be awakened when their arms dropped to the side. Wilder made his movie in 1957. The Eames Chaise made its debut in 1969. As with many Eames designs, it’s clear that this design benefited from “the tincture of time.”

As is often the case, Charles and Ray Eames provided insights into their design thinking when they had a chance to talk about their designs. Charles gave an interview to Hector Arce of Home Furnishings Daily in 1969 when this design was first available to the public.

Charles refused to talk about the “look” of the Chaise, and instead focused on another aspect of it, relating to performance. Like the Eames Aluminum Group and the Eames Soft Pad Group, the structural support of the Eames Chaise is aluminum. But unlike those other two groups, which are have polished aluminum frames, Charles and Ray decided that given the exposed expanse of cast aluminum that they needed for this design’s structure, they ought to coat the aluminum, to make it less reactive to heat or cold.I don’t think you’ll see any design breakthroughs. I hope we might have a performance breakthrough. One of the problems is to attempt to use metal in an honest way. I’ve always looked at Oriental lacquers as an integral part of the piece, whereas paints and enamels are more of an applied thing. Lacquers are great to look at and feel. Now we will either cross the threshold or not. We may find a finish that works in the same way with metal. Don’t ask me about new lines and curves. I’m more interested in performance and the way things act in the room.

The aluminum frame of the Eames Chaise is coated in epoxy, originally available pigmented in such a way that the color resembles that of Japanese eggplant. The selection of that color was Ray’s inspiration, who found it a good match for the black leather they specified for the seats. In doing this, Ray introduced the color purple to furniture. In later years, we’ve worked with our manufacturers to offer the aluminum coating in alternative colors, including black and white epoxy. It’s interesting to look closely when you come across an old Eames Chaise. After many decades the leather may become somewhat creased and worn, but you’ll rarely see an Eames Chaise with a chipped finish.

The basis for most Eames furniture is structural, and the structures are often architectural ones. While it wasn’t made this way for the sake of its visuals, the cast aluminum base for the Eames Chaise seems to have been made with a structural approach similar to what one sees on good bridges. As with a well-designed bridge, every element of the structure of the Eames Chaise is shaped to maximize its strength in relationship with its weight. 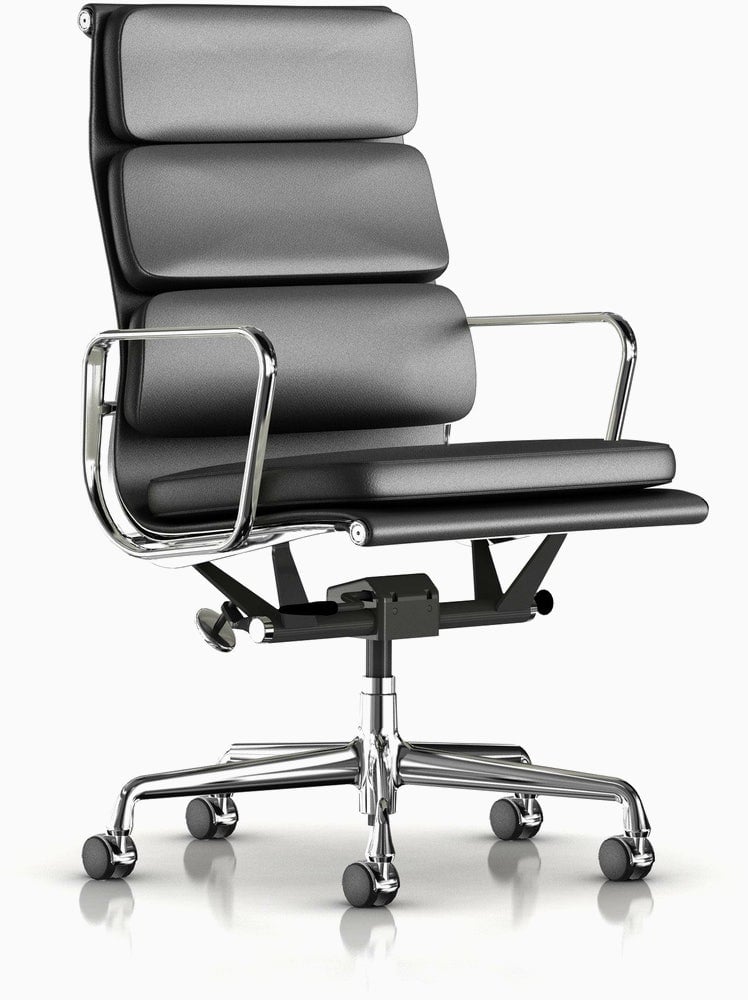