The Eames storage units (ESU) and desks (EDU) use an ingenious and inventive construction system as simple and as openly engineered as a bridge.

The elements of the Eames Storage Units and Desks come together with a ﬁne unforced logic, and the methods and mechanics and reasons are completely apparent on the whole. The units have been designed in such a way as to permit exceptional economies in manufacturing. The combination of standard elements can be arranged into several different units to serve an inﬁnite number of uses—in the living room, the dining room, the bedroom, or as a room divider.

Made of perforated steel extrusions with diagonal bracing, they could be configured as low credenzas or high bookshelves. The storage units facilitate open storage, closed storage, and drawers. In addition, buyers could customize the interior arrangement, selecting plywood drawers or doors and perforated metal or enameled Masonite filler panels. There are two color choices: “Colorful” units with primary colors of red, blue, yellow, and “Neutral” with beige and grey colors. The wood elements of the storage units and desks are either walnut or birch. The two standard units are forty-eight inches by twenty-four inches wide; both are sixteen inches deep and thirty-two inches high. There had never been like it in the consumer market. Its closest parallel is industrial shelving, but this was years before the words “High Tech” were bandied about by interior decorators.

True to the Eames philosophy, all materials were presented honestly: the extruded steel structure was unadorned and unconcealed. There were optional metal parts: cross wires and sheets of steel drilled with holes.  A type of thin plywood door that Charles and Ray had first developed in 1946 for their original case goods was available. These plywood sliding doors were molded with circular indentations, which gave them a cared-for appearance and increased the wood’s durability and resistance to warping.

Of all of the Eames designs, they provide the most obvious example of the benefits of standardized parts. The same parts could be used to make several different kinds of storage units, and the cost savings for the manufacture meant lower prices to the consumer. In addition, the storage units and the desks were sold to consumers fully assembled, in configurations ordained by Charles and Ray Eames.

In 1950, flat-pack shipping wasn’t yet an accepted practice in the furniture industry; otherwise, these would have been sold that way. In another way, Charles and Ray showed great care for their customers through to the delivery of the goods. They designed playful decorations for the large boxes in which the assembled units were shipped to encourage parents to turn the boxes over to their kids for play objects.

Each cardboard box was printed in a colorful red and black design and featuring the distinctive Herman Miller “M.” Each heavyweight cardboard carton was reinforced with wood splines. After the furniture had been removed, one only had to remove the wood splines and attach them to the bottom of the cartons to make the boxes into a playhouse that young kids would enjoy. While these early boxes came with separate leaflets offering instructions on “How to Make a Playhouse,” the process was self-explanatory: dotted lines suggested locations for an entrance and a view out, as well as jaunty awnings.

The Eames storage units were introduced to the public for the first time in the “Eames room” of Alexander Girard’s “An Exhibition for Modern Living” at the Detroit Institute of the Arts. They were offered for sale to the public starting in 1950. In December 1949, Charles and Ray Eames had moved into their own home, the Eames House, and there is a clear connection between how that geometrically shaped residence was made and how these storage units are put together. The Eames House even has the same kind of cross-bracing on the front of the house for structural stability, albeit at a much larger scale, as the crossed wire bracing on storage units.

Charles and Ray didn’t approach design as a visual exercise. Therefore, it would be a mistake to think that the similarities between the Eames House and Eames Storage Units relate to the appearance of the things. Instead, each design, the house, and the storage units look the way it does because both are straightforward, and natural assemblages of standard shapes of the materials used.

The desks came in two different widths, 44” and 60 inches. The desks were originally available as standalone designs, or with returns, for typewriters. The tops are flat expanses of plywood, with the characteristic “radius edge” of many Eames designs. The radius edge is a thoughtful touch, appreciated by anyone who has bumped their hip into a sharp right-angle desk or tabletop.

Original production and sale continued until 1955. At the end of the twentieth century, and continuing to this day, the Eames Storage Units and Eames Desk Units are both featured again in our partner’s sales offerings. 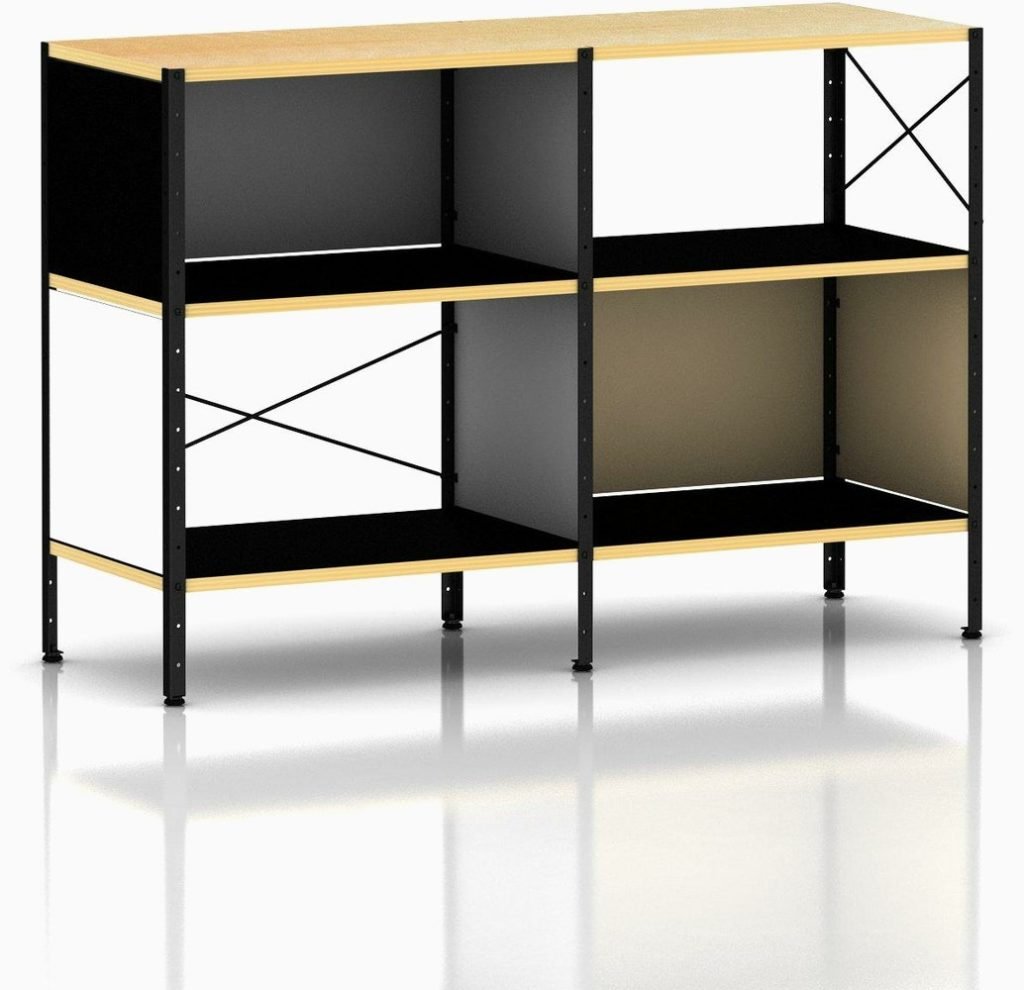