Zoom in, zoom out with the Powers of Ten.

This item is currently unavailable.

An adaptation of the Charles and Ray Eames classic 1968 documentary by the same name, Powers of Ten: A Flipbook, is an ocular journey dealing with the relative size of things in the universe and the effect of adding another zero. Travel from the edge of the universe to an atom in the hand of a sleeping man at a picnic. The effect is a spectacular cosmic adventure. A journey that involves astronomy, biology, particle physics and much more, but ultimately, it is about size. At one extreme of the flipbook is a view 10 million light years across (10+23 meters)—the Milky Way a tiny speck towards the center. At the other extreme, the frame is completely filled by the tiny proton (10-15 meters)
Add on a Powers of Ten DVD or Scale is the New Geography to complement the flipbook and save!

Charles and Ray were serious about the designing of objects—from the initial brainstorming of constraints to an item’s longevity through the decades—and simultaneously, they derived many of their design processes from toys. The intrinsic qualities of toys taught the Eameses that a design could be unselfconscious, simple in its use of materials, and provoke a feeling of delight. 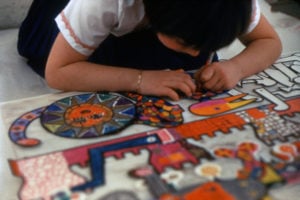