Atlas: A Sketch of the Rise and Fall of the Roman Empire
Visit now 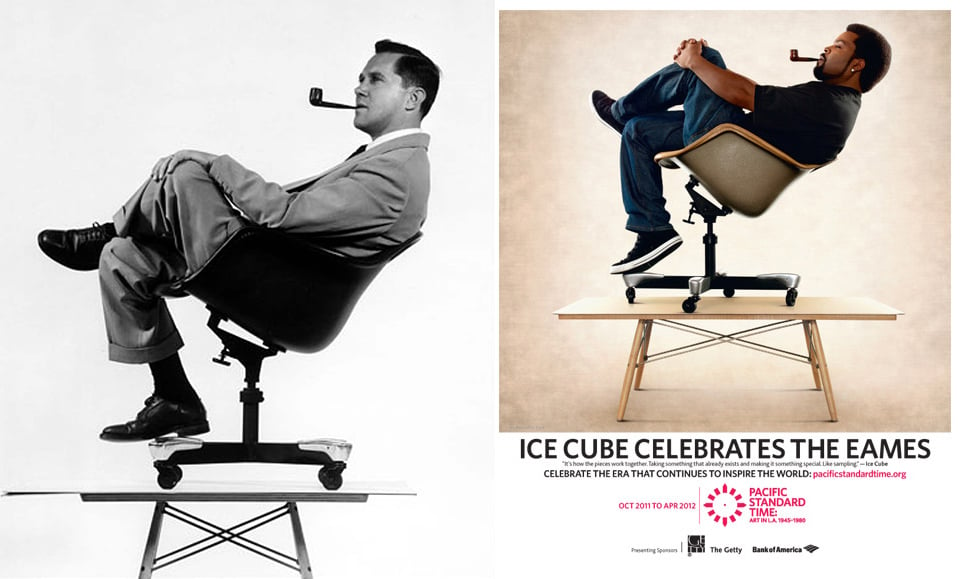 In making this poster of Ice Cube, the creators applied the same careful attention to detail as the Eameses did in their own work. They gained inspiration from this black and white image on the left, taken by Charles in 1953, and sourced a vintage, first iteration DAT-1, so that it would match the design in the original photograph. These early chairs were made with a distinctive cruciform iron base and applied cast-aluminum foot pads. The DAT-1 was the first Eames contract chair. The “D” stood for “Desk” height, the “A” for “Armchair,” and the “T” for “Tilt” mechanism. Charles and Ray added the suffix “-1” to indicate that it was upholstered. Herman Miller marketed this iteration of the DAT-1 from 1953 to 1957. It featured a tilt capacity and a rolling base that could withstand the wear and tear of 8-hour workdays all year long.

By 1957, the Eames Office had developed an improved contract base made of 100% cast aluminum. With this new iteration, the design duo was able to provide a more direct solution, because the solid aluminum base could be cast in one piece. The design was lighter than the former iron base, but strong enough to meet Charles and Ray’s standards of strength and durability.

The first iteration of the DAT-1 chair base, seen to the left, weighed 33 pounds. The second iteration, the green chair to the right, weighed only 32 pounds. The new base was christened the “Eames contract base,” but the name of the chair model remained the same. Charles and Ray continued to call the design the DAT-1 because, even though the base was different, the chair still addressed the same need. In the gallery below you can see views of every aspect of the vintage DAT-1 used in the Eameses’ photo shoot.

The Eames contract base is still in use today by both of our manufacturing partners, Herman Miller and Vitra.

Ice Cube provided the following testimony with this poster: The Eames were masters of sampling. They took existing materials and mixed them into something greater and served their designs up to the people.