Where is the Eames Elephant Now?
Read more

The Making of a Craftsman

The following are some of the remarks made by Charles Eames at The First Annual Conference of American Craftsmen, held under the auspices of the American Craftsmen’s Council on June 12-13-14th, 1957 at Asilomar, Monterey Peninsula, CA.

All of his remarks at this conference can be found in the book, AN EAMES ANTHOLOGY:  Articles, Interviews, Letters, Notes and Speeches by Charles and Ray Eames.  This is the portion that is entitled, “The Making of a Craftsman.”  All of his remarks were originally published by the American Craft Council in 1957.  Their website is https://craftcouncil.org/history

CHARLES EAMES: I do not think there is any single group who use the words “craft” and “craftsman” with deeper respect than architects do and if there is a name which I would like to copyright, it is the name—“craftsman.” It is a name which places a tremendous responsibility on those who claim it. When I say that the papers we have just heard were prepared in a craftsman-like way I am stating what I feel—that a tremendous amount of thought and work went into their preparation, and that they merit careful reading and thought by all of us who are concerned in any way with crafts and craftsmen.

Yesterday afternoon I dropped into the Wood Panel in time to hear some of the discussion. Something happened there that I believe must go in all the discussions that come up at this conference. Prestini was saying, “All right for so and so, and for this and that but really, what do you feel is the place of a craftsman in our society today?”

There were a number of statements made in reply to this, and some perfectly good ones, most of them ending with man’s relationship to the thing he was producing, the amount of satisfaction he got from it, and the sincerity with which he did it, as well as the value of the opportunity for individual expression. And so on. But the real question that Prestini had put remained unanswered.

In the course of the discussion Prestini was questioned about his bowls–what they mean to him, what they give him, and so on. Yet when I think of Prestini as a craftsman (and I do), his bowls are not what I think of first. Nor even second. I have to sort of work my way around to them because, fundamentally, and first and second, I think of Prestini as a craftsmanlike guy with a terrifically humble attitude to the materials that he works with and to the problems that surround him.

I use Prestini as an example because the question he brought up is closely related to the way I think of the building of the values that go to make a craftsman. And believe me, in our world and in our time, we are deeply in need of the values with come under the head of “craftsmanship”. I would venture to say that society today is more in need of these values than of any other thing.

The richness that a craftsman working for himself in a simple and direct way gradually brings to our society cannot be overestimated. Society needs this. The only contention that I would have with the individual craftsman, or with a group of them working for themselves and for the satisfactions they get from their work, is in those areas in which the individual craftsman is uncraftsmanlike. And this is the most damning thing that you can say about the majority of craftsmen.

The same thing is true of architects. Architects are just as bound as craftsmen. So are educators. So when I point the finger of uncraftsmanship to some of the craftsmen. I am pointing it all around the circle, to all other areas. This is the problem of our time. It is the problem that confronts us as a nation and it is the problem of the human race. If we are going to survive we have to become craftsmanlike people; and in that word’s deepest, fullest sense.
It is urgent therefore that we start thinking and talking about craftsmen and craftsmanship in a much broader and unlimited way.

The field of design is undergoing changes. It would be interesting to see how a designer of great value to a company functions today. A great number of them, functioning as designers in the best sense of the term, for various companies producing material are not even drawing a line. It’s not necessary. Nor do they consider a form. Nor do they dictate necessarily any special relationship. Very often they work within areas, and there are so many, that no individual would possibly presume or want to be responsible for their form and structure himself. Such a presumption would be ridiculous.

Because of this, the responsibility for a decision – aesthetic, practical and connected with craft–has to be set back in the industry itself. So we have the designer in industry feeding back basic responsibility to management, to the purchasing agent, to the engineer, to the analyst. There is an area in design that has to do with not taking on individual responsibility, but making a sense of responsibility run through industry and management, making those who have previously thought of themselves as responsible only in those areas — management and industry — more and more responsible in the peripheral areas.

This is the sort of thing that must happen to the whole of society. There is an area in large industry which has this and that in abundance, but which lacks craft. And there is a similar lack among craftsmen in regard to what industry has. Craftsmen need to examine the mechanics of production and the results and relationships in industry. Mutual understanding will do much for both. It will help build up a feeling of craft in industry, to industry’s and the craftsman’s and society’s benefit.

I began by speaking of architects, and now, at the close, I want to go back to architecture again just to mention Mies van der Rohe. I want to mention Mies because here is a man who is essentially a superb craftsman. It has been said of Mies that the ambition of his life would be to take the most perfect brick in the world and lay it in the most perfect bed of mortar and in the most perfect relationship to the next brick.
Mies himself has something to say which bears on this, and which bears much thinking about. He said, “I don’t want to be interesting. I just want to be good.”
This I think, a craftsman should have tattooed across his chest. 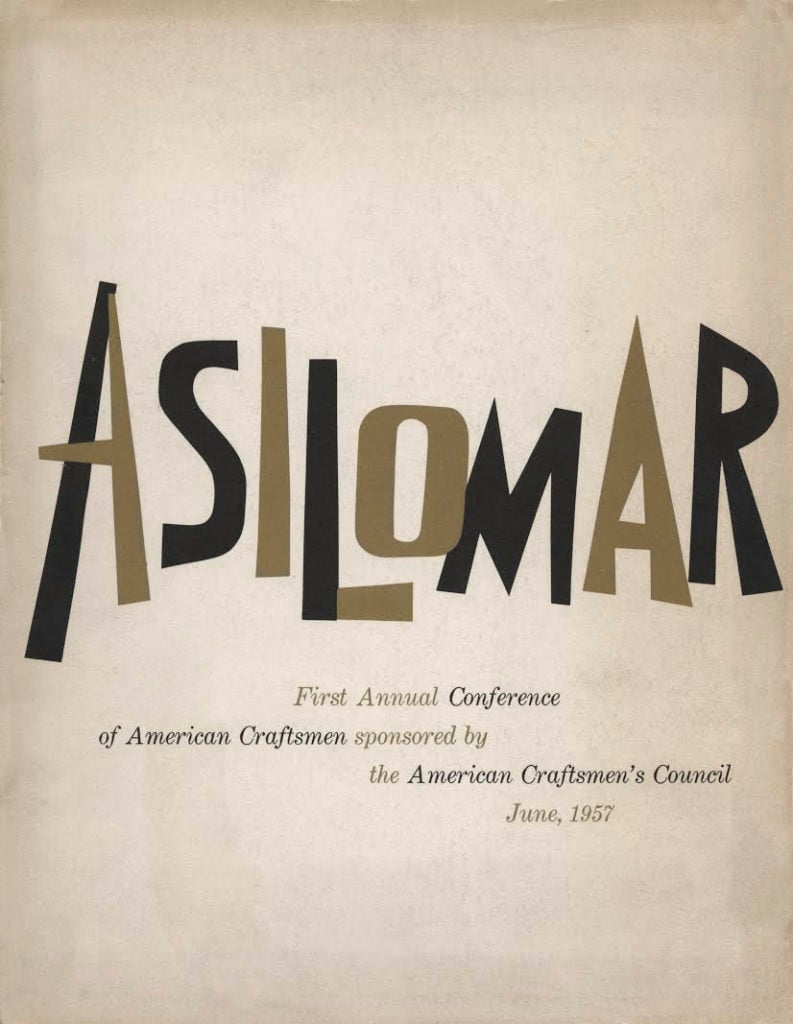 Cover of the American Craftsmen’s Council publication that includes Charles Eames’ remarks at the conference.