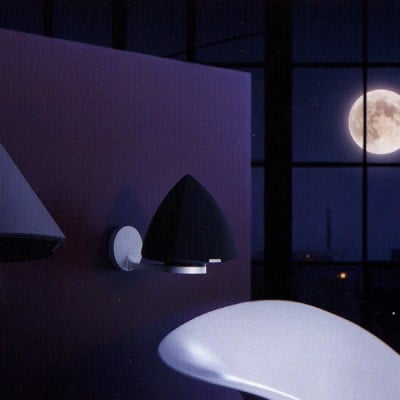 IN THE PHOTOGRAPH:  IRV GREEN IS ON THE LEFT, HIS PARTNER AT ZENITH PLASTICS, SOL FINGERHUT,  IS ON THE RIGHT.

QUESTION: Where did you first meet Charles and Ray?

ANSWER: I received the phone call.  And the man introduced himself as Charles Eames.  I’d never heard of him. That was about 1949 I believe.  And he said he had an idea of making a chair out of fiberglass and resin.  So we made an appointment.  And it was to be at 1:00 at the 901 office building.  And I remember saying something (??) was relatively new at the company and came from Owens Corning Fiberglass.

He’d like to come along with me.  So he says you’re sure.  And we — I had a prior appointment — I think it was in San Gabriel.  And if you think back to those days, there was no Santa Monica Freeway.  So we had a long trek from San Gabriel to Santa Monica — Venice.  And though we got there at one and there’s no Charles Eames.  He was out, so we waited and waited and waited.  And finally, about two o’clock, we decided to just leave.  And Charles walked in about give after two.

We sat down and talked.  And it was most fascinating conversation.  He was an intriguing guy to meet.

And we left there I think at 6:15 in that evening.  So it was sort of eye-opening — his ideas and what he was looking for.  Of course, subsequently I learned a great deal about design because I can think of that poster he had in his office.  It was just a gigantic red 2.  He took it off the wall to see if it looked like it came from a circus poster where they’re putting it on a billboard.  And I asked him why he had that there.