The Playful Designs of Charles and Ray Eames
Read more

INDIANAPOLIS, IN – Chairs take the spotlight in the new exhibition, More than Four Legs: A Closer Look at Chairs, opening in the Star Studio at the Indianapolis Museum of Art on August 10th . This exhibition invites visitors to look at chairs not as everyday utilitarian objects, but as the culmination of personal expression and innovative design. More than Four Legs will run though January 19, 2009. The exhibition primarily includes chairs from the collection of Carla Atwood Hartman—granddaughter of famed furniture designers Charles and Ray Eames 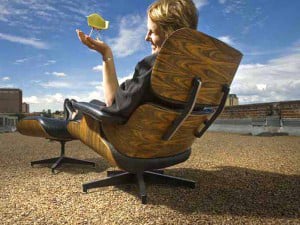 The exhibition also features pieces from the IMA’s collection and Oldfields-Lilly House and Gardens. Many original Eames designs will be featured, such as the iconic Eames Lounge Chair and Ottoman, along with other modern, yet classic chairs by Emeco and designers Gaetano Pesce and Olivier Mourgue. “Chairs fascinate me. They always have,” says IMA collaborator Carla Hartman. “Chairs are pieces of sculpture, most often scaled to humans. And as my grandfather Charles Eames said, they are ‘a piece of architecture you hold in your hand.’” From the simple to the luxurious, hand-crafted to mass-produced, More than Four Legs features chairs from a variety of times, styles and designers. Viewers are urged to look at the chairs up close and from different angles than they might normally view them, seeking out the sculptural and aesthetic qualities that make chairs works of art. The exhibition further examines how specific design choices affect the way people interact with the chairs and how the chairs are produced, valued and conserved. Carla Atwood Hartman, education director for the Eames Office and granddaughter of Charles and Ray Eames, primarily works with museums, schools and the public to extend the creative legacy of the Eameses. Hartman worked as an educator at the Denver Art Museum for 13 years before becoming the education director at the Eames Office in California. Hartman’s personal collection includes more than 300 chairs from the 20th century. Star Studio is a hands-on, interactive gallery space, offering two art installations per year. With a particular focus on youth and families but designed for all ages, Star Studio hosts environments that spark the imagination through interactive art making, sensory interaction and a fresh look at creative processes.