How Style Differs from Design Posted January 13, 2012 by Daniel Ostroff

"Mr. Demetrios spoke to The Wall Street Journal from Los Angeles and San Francisco about why designers shouldn’t worry about style, taking the ferry in Hong Kong and his favorite Namibian hotel." At first glance, Eames Demetrios seems to live in the past.

The grandson of Charles and Ray Eames, arguably the 20th century’s most famous furniture designers, is the principal of the Eames Office, which sells merchandise related to the family’s namesake line of chairs and promotes their legacy. He is also the creator of “Kymaerica” and “Kcymaerxthaere,” two art projects that seek to show an alternative history of the world via activities such as placing bronze markers in public places across the globe, and storytelling sessions that expand and explain his fictional universe. 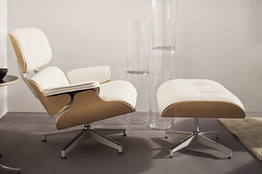 These days, however, the 49-year-old movie buff — he claims to have watched more than 500 films during his senior year in high school — is spending more time in the developing world. His recent travels have taken him to India and China to promote Eames-furniture maker Herman Miller, as well as his alternative-history interests.

Mr. Demetrios (his parents named him Eames to keep the name in the family) spoke to The Wall Street Journal from Los Angeles and San Francisco about why designers shouldn’t worry about style, taking the ferry in Hong Kong and his favorite Namibian hotel.

Newspaper put design stories in the style section, but style is different from design. Design is about problem-solving, addressing needs and working with constraints. I talk to a lot of young designers and say, “don’t worry about your style.” Take care of problems, and everything will take care of itself.

What inspires me is the richness and complexity of the world. It’s a completely magical phenomenon that includes humans, the built environment and the natural world.