EAMES WORDS at The A + D Museum Posted November 2, 2011 by Daniel Ostroff

From KCRW’s Beth Topping: “Simply put, Charles and Ray Eames formed one of the most celebrated American design teams of the 20th century. Their collaborations in furniture, film, photography and textiles drew on their mutual inspirations and a simple philosophy about form and function. Once, when asked what was more important, beauty or function, Charles Eames famously said, “I should make a choice between keeping my head or my heart?””

Here’s the link to the review, thanks to Beth Topping and KCRW’s DESIGN AND ARCHITECTURE BLOG

If you click Here you will see some of the pieces for the exhibition that I originally curated for The A + D Museum, on the official Getty website.  We had to modify my original concept, which was Eames quotes along side real Eames designs, an idea that is important because no one expressed better what they were working to achieve than Charles and Ray, and at A + D we focused on the Eames quotes themselves.  All of those pieces on the Getty website, and 400 plus more, are on display here, at COLLECTING EAMES, another Getty exhibition.

Here’s the complete review of the A + D exhibition:

Simply put, Charles and Ray Eames formed one of the most celebrated American design teams of the 20th century.  Their collaborations in furniture, film, photography and textiles drew on their mutual inspirations and a simple philosophy about form and function.  Once, when asked what was more important, beauty or function, Charles Eames famously said, “I should make a choice between keeping my head or my heart?”

Finding a way to bring beauty to utility was a specialty of the Eameses and something they sought out in their day-to-day lives.  The current exhibit at the A+D Museumin Los Angeles, EAMES WORDS — Eames Designs: The Guest Host Relationship, provides a unique and thoughtfully curated look into the way Charles and Ray Eames interpreted the world around them, finding beauty in utility.  Their interpretations not only inspired their famous designs but shone a light on the extraordinary aspects of everyday objects — whether it’s the beautiful braided knots in egg bread or a simple kite, whose design success is solely determined by its ability to fly or not fly.  Charles Eames viewed the role of a designer as that of a host, whose job was to determine the needs of his guest.  The A+D exhibit makes Charles and Ray Eames hosts in the traditional sense of the word, inviting visitors into their world and allowing them to see it as they did. 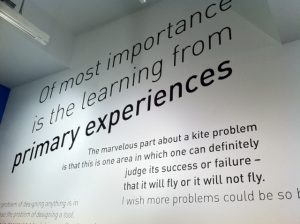 The exhibit is designed by Deborah Sussman, a longtime colleague and friend of the Eames’, together with graphic designer Andrew Byrom, architects (M)Archand many other contributors. It is a seemingly casually grouped collection of text and objects.   The text consists mostly of quotes from Charles Eames — on walls, under exhibit pieces and on note cards — which playfully refer to the objects throughout the exhibit, whether it’s a sculptural grouping of scissors, toys or a bucket of nails.  I won’t outline the exhibit in its entirety, because part of its joy is the sense of discovery and seeing objects anew.  However, the Eames’ film essays are not to be missed — they are timeless and beautiful and their attention to the seemingly mundane makes life seem a little fresher and more whimsical.

As a vehicle for visual interpretation, the exhibit could also be compared to George Nelson’s iconic book, “How to See.”  In the book, Nelson outlines society’s problems with visual illiteracy and how to recognize common visual references in a man-made world.  Ironically, Nelson — Herman Miller’s design director in the 40s — was responsible for bringing the Eameses to Herman Miller.  Their shared sense of seeing the insignificant and identifying patterns is inspiring even today, which is why A+D should be applauded for taking this unusual look at Charles and Ray Eames.  While the results of their design collaborations are truly extraordinary (many of their pieces are still in production today), the exhibit provides a rare glimpse into the quiet and personal space in which great design is created. 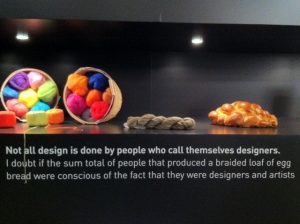 While in their lifetime Charles Eames often received the majority of the design credit, it is clear that his partnership with Ray, both in marriage and work, was a collaborative effort. Ray’s influence as well as her vision as a designer, were essential to the Eames’ success.  One of the most touching examples of their partnership is easy to miss in the A+D exhibit but it is a beautiful and heartfelt example of their life together.  On a small table — designed by another friend and collaborator of the Eames, Tina Beebe, to evoke the beautiful table settings Ray was known for among friends —  lies a collection of personal tchotchkes — glass tumblers, bits of pastry, flowers and a bowl of candy. Among them is a quote from Charles Eames’ daughter, Lucia, written shortly after Charles’ death:

“Just past dawn,
at the Eames House,
Charles and Ray’s House,
now
…her house.”