In December 2015, Vitra donated 51 Eames Wire Chairs to be reinterpreted by some of Europe’s finest creatives and auctioned off for charity. From a barbecue grill to a signature red Louboutin pad, these adaptations are worth checking out. How much fun would Charles and Ray have had looking over 51 artist adaptations of their iconic Wire Chair? Perhaps it would have been reminiscent of 1950, when Eames friend and painter Saul Steinberg famously drew a cat on an Eames Molded Fiberglass Armchair (on view at the Barbican Centre through February 14, 2016). Steinberg also re-imagined an Eames La Chaise, drawing a naked lady whose figure follows the curvature of the sleek lounge chair perfectly, further emphasizing its organic shape. 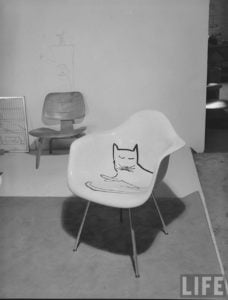 This is the fifth year that Vitra has supported the annual auction benefiting La Source, an organization whose mission is to help underprivileged children find and express themselves through art. In previous years, they have done similar challenges around other famous furniture designs.

The one-offs from this year were temporarily on display at Hôtel de L’industrie in Paris, and sold at auction December 14. Gérard Garouste, the artist who founded the non-profit organization, also took part in the challenge. He chose to do away with the physical chair, opting to create a painting of it instead.

The event has been auctioneered for the past 18 years by Simon De Pury, co-founder of Phillips de Pury & Company. When asked why he thought the Wire Chair was an intriguing design to adapt, he explained that, “Whether it’s chairs, tables, objects, a pair of sunglasses, every now and then you have one item that becomes completely iconic, so iconic that even if you’re not in that field, it is engrained in your subconscious. The Eames Wire Chair is clearly one of these iconic items. It is interesting to see how each artist reinterprets it in his or her own way, particularly with something that is so much a part of our collective unconscious.” (Read the full interview from Designo here.)

Check out a few of the submissions below: Charles and Ray designed the Eames Wire Chair in 1951 after they began experimenting in bent and welded wire. Inspired by trays, dress forms, and baskets, the Eames Office developed a number of pieces, including the wire version of the single-shell form.

The shell design combines transparent lightness with technological sophistication. Available exclusively from Vitra and Herman Miller, the Wire Chair is offered without upholstery, with a seat cushion, or with a two-piece seat and back cushion that, due to its shape, is nicknamed the “Bikini Pad.” Vitra also offers a powder-coated finish that is well-suited for outdoor use.